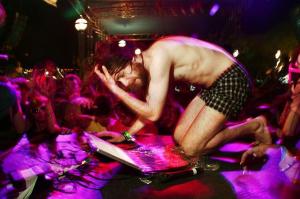 A representative photograph of Girl Talk.

You’ll have seen the picture: in the midst of a throng of dancing people is a single white man, often shirtless. Perhaps he has a beard, perhaps not. If there is no beard there is certainly his hair. It is wet; it is soaked in sweat. More than likely it is flying as he shakes his head from side to side. His eyes are closed in ecstasy, or open in furious dedication. He is climbing atop a table, he is bent over a laptop. He is Girl Talk.

What does it mean to be ‘authentic’ in America?

What attitude? What pose? The pose of ‘authenticity’. His beard is unkempt: in his life there is no time for grooming. His hair is flying wildly: he is moved to eager dancing by the music. His eyes are closed: he has been transported, his music has transported him beyond the club. He has removed his shirt: he is confident in himself, eager to be his natural self among the world. He is crawling on the table: his visions are not for mortal men. Here is a man, the picture says, who lives in an uncomplicated world, whose function is not ‘smothered in surmise,’ who makes and lives directly, who is moved by things and does what he is moved to do. Here is a man who has calculated nothing; here is an ‘authentic’ man. ‘Authenticity’: the idiotic notion that it is possible to live exactly as one pleases, to be unimpeded by life, to be one’s unconstructed self.

His ‘authenticity’ is especially striking given his surroundings. In the front row a girl looks at him through sunglasses. In other circumstances those sunglasses might be endearingly, charmingly twee. Here, though, adjacent to a nearly naked image of ‘authenticity’, they seem contrived and obvious, part of a ritual invocation of hipster cool. She, we sense, must construct herself in order to be cool. Girl Talk, the pose of authenticity, is a man who becomes cool by deconstructing himself, by forgetting shirts, razors and eyes. He resembles nothing more, in these photographs, than a shaman in a trance–better than a shaman, we sense, for he needs no mystic smoke or bitter mushrooms. He makes music and the music makes him real. He is quite literally high on his own supply–but not his own supply of drugs. His own supply of life. What could be more ‘authentic’ than this?

Who is Girl Talk? A musician who does not play an instrument. Instead, his albums are ‘mash-ups,’ combining samples of diverse songs in rapid alternation: Beyonce over Phoenix, with Ludacris soon joining, then Lil Wayne over Joe Jackson, then Wiz Khalifa over the Rolling Stones–and this only a few of the samples on a single song. Comp-lit theses could be written: on polyvocality, on an author actually dead, an author usurped by a curator, on productive catachresis, on referents present and absent, on the potential fate of a novelist who attempted a similar trick. And yet–can this be called ‘authentic?’ If authenticity is originality is it only the arrangement, only the curation which is authentic.

What tension! What a self: so authentic, so completely referential. But imagine meeting someone in 2011. What do you do? You find them on Linkedin, on facebook, or on twitter. You must answer a question, the question of their authenticity. You are trying to determine whether they are for real. Will the internet tell you? Of course it will not. You know in your soul that only conversation can determine authenticity. You know that the internet is a silly game of masks.

‘Authenticity’ in America: a man with closed eyes tearing off his shirt to dance. But what is he dancing to? Music, made by himself. Made? Surely not. Collected, we might say. Curated. Referenced. Sampled. So what is Authenticity: an earnest reaction. But not all earnest reactions pass our test. Imagine the man who reacts earnestly to mayonnaise and threadcounts. Do we want to be his friend? Would we go to his party? We might not: to be authentic is to dance. But it is also to dance, as Girl Talk does, to the right music.

That there is enough in the world already. That what we must do is not add more: instead we ought to sort. We ought to determine what to keep and what to throw away. And that only then should we begin to feel. That ‘search’ might be a more important verb in our lives than ‘make.’

Perhaps it is a truism that nothing is new under the sun. But the implication of Girl Talk, of curated authenticity, is that there need not be. That in these few thousand years man has made enough. Perhaps it is easier to feel this way in America than in other places; perhaps that is why things here have become so incoherent.